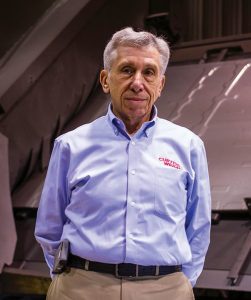 Dominic Cimino, Regional Manager of the North America Shot Peening Group for Curtiss-Wright Surface Technologies, received “The Shot Peener of the Year” award for two reasons. The first reason is his substantial contributions to the advancement of peen forming and shot peening. The second reason is because he was nominated by not one, but four of his work associates. An internal nomination carries a lot of weight with us since no one can make a better assessment of one’s value to the industry than co-workers. The following are Dom’s thoughts on his career.

“I graduated from Stevens Institute of Technology with a Bachelor’s degree in Mechanical Engineering. My first job out of college was as an application engineer in a company selling steel wire strand for pre-stressing concrete. This is actually similar in principle to what we are doing with shot peening. The strand is stretched and concrete beams or floor sections are cast around it. The strand is then released, imparting a compressive stress in the concrete. When I interviewed for a job with Curtiss-Wright Surface Technologies, my understanding of residual stresses was an advantage in winning the job as Project Engineer for forming Airbus A310 wing panels in 1980.

I also became involved with developing and improving the forming procedures for the Canadair Challenger and Dehaviland Dash 7. At the time, forming was basically a trial and error method of development. I was lucky enough to work with Charles Barrett, the 1994 Shot Peener of the Year and a Metal Improvement Company (MIC)employee. I learned a great deal from him.

I moved on to become General Manager of our plant in Long Island and worked with forming skins for the Grumman A-6 and E2, as well as the Fairchild A10. We also corrective formed the titanium skins for the F-14, which were creep formed.

I always thought there should be a way to determine the feasibility of peen forming a given shape other than trial and error. As a result of being unable to form the Gulfstream G4 by using purely shot peen forming, I was motivated to develop formulas which would predict whether a given wing skin compound shape was within the capability of peen forming.

These analysis techniques were first used in forming the wing skins of the Cessna Citation X in 1995. Cessna included Metal Improvement Company early in the design process and, as a result, we were able to improve the manufacturing producibility of the panels. Dave Francis, the 2002 Shot Peener of the Year and another MIC employee, translated the formulas into a computer program, which allowed the analysis to be displayed graphically.

MIC utilized the same basic formulas while determining parameters for laser peen forming of a wing panel from the 747-8. This exercise enabled us to confirm the predictability of the equations as the laser peening energies could be very precisely controlled, and the shape forming results were as predicted.

MIC has since used these predictive techniques to help design and form the wing panels for the Embraer KC390 and the E2 versions of the 175 and 195. These techniques were also used to develop forming programs for the Pilatus PC-24, and enabled Pilatus to produce a one-piece skin whereas the original design required multiple wing skin sections. MIC is now using these techniques to predict distortion of metal parts and ways to avoid or correct post-machining distortion in peened parts. I have enjoyed working for almost 38 years in the shot peening industry, and am greatly honored to receive this award. I have learned the science and capabilities of shot peening from others, and I’m hopeful that my contributions have helped advance the state-of-the-art in shot peening and create new applications for shot peening in the future.”

Contribution Highlights
Throughout his tenure at Curtiss-Wright Surface Technologies (CWST), Dom has had the distinction of managing nearly every one of CWST’s 24 shot peening business units in North America. Dom’s knowledge extends from the operational aspects of meeting peening specifications within CWST’s facilities to providing design expertise to CWST’s customer base. His flat panel calculation models have contributed significantly to CWST’s long-term partnerships with aerospace OEMs, and his input has been sought by numerous wing skin design groups in many countries.

Dom is an important technical advisor to the entire Curtiss-Wright organization, providing guidance on appropriate shot peening specifications. In recognition of his contributions, Dom was chosen to be a Technical Fellow of the Curtiss-Wright Corporation in 2015. This honor is reserved for the top 1-2% of Curtiss-Wright’s engineers. The following are a few of the projects that led to this achievement.

1. Dom’s development in 1980 of the initial peen forming processes for the A310 Airbus led to a partnership with Airbus that continues today. CWST’s facility in Chester, United Kingdom has peened over 55,000 production panels on various Airbus aircraft from the A310 to the A380.

3. Dom’s shot peen forming prediction models were adapted to the challenge of laser peen forming a highly curved 747-8 lower wing skin, which led to the installation of a shop-in-shop laser peening cell at Boeing’s facility in Frederickson, Washington.

Research Projects
Based on experience and empirical data throughout numerous shot peen forming projects, Dom determined the physical characteristics that drive the response in the base materials. He created models to predict the metal growth required from shot peening to achieve specific compound wing shapes using various engineering CAD and FEA tools. These models were further enhanced to predict the initial machined flat panel designs required to meet a final desired wing panel shape. The models are critical in the design stage of all new wings, and Dom’s work has been broadly utilized in the industry.

Aerospace Auditing: A World of Opportunity
Upcoming Conferences in China

Shotpeener.com is sponsored by Electronics Inc. (EI). EI provides products and services for the shot peening industry, including: